Once relatively isolated from the stress of COVID, emerging Asia has come under pressure due to the new Delta COVID variant. Confirmed cases have increased across the region, forcing governments to impose further restrictions on their respective countries. As a result, local financial market volatility has also increased over the past month and several regional currencies have sold off. While the trajectory of the Delta variant is very blurry and further short-term depreciation is possible, we believe that current exchange rates are at attractive levels for companies with local currency spending.

Overall, developments related to COVID still seem to be moving in a positive direction. However, recent headlines suggest that a more transmissible form of COVID, the Delta variant, has spread rapidly, particularly throughout Asia. Originally identified in India during the country’s severe second wave of infections, the Delta variant is believed to be more contagious than other strands of the COVID virus. Given India’s proximity and the nature of border controls, the Delta variant has spread across Southeast Asia and pushed daily case levels in several countries to record highs ( Figure 1).

Indonesia is currently registering more than 21,000 new cases per day, a record, while Thailand and South Korea have also reported a record number of daily cases. Even the Philippines experienced a high case load and reported that the Delta variant was responsible for a significant portion of the number of new cases.

The regional response to the increase in cases has been to impose further restrictions or, at a minimum, to delay the reopening process. New travel restrictions and restrictions have been put in place in Indonesia and the Philippines, while Korea has delayed reopening its economy for at least a week. Thailand, an economy heavily dependent on travel, has chosen to open up the island of Phuket to tourists; however, the majority of the local tourism industry will remain closed for the time being. As most regional reopenings are delayed, mobility continues to suffer. With the exception of India, mobility in most emerging Asian countries is still well below pre-COVID levels and, recently, has stabilized or tended to decline (Figure 2). 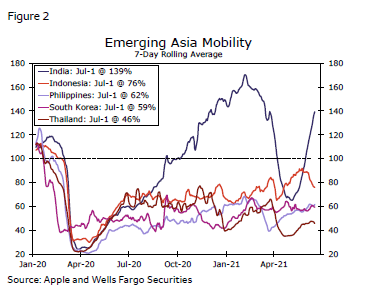 Local financial markets have been volatile since the increase in Delta variant cases. Most emerging Asian currencies were already facing a post-hawkish FOMC meeting; however, in recent weeks regional currencies have come under additional pressure as sentiment has deteriorated. At this point, the currencies of all the countries mentioned above have sold above their respective 50-day moving averages and have broken through other key technical levels. But, in our view, this recent massive sell-off represents an opportunity, especially for companies whose spending is dominated by these local currencies.

Going forward, we expect vaccination rates to increase across the region, which may create more positive viral dynamics in each country. Asian countries have already demonstrated their ability to contain the virus, and we believe these governments will be able to deal effectively with another wave of infections. In this case, it may be prudent for companies with local currency spending to speed up their purchases or to freeze current exchange rates. We believe that emerging Asian currencies at these levels are oversold and that companies can benefit from these attractive exchange rates. On the other hand, companies whose income is denominated in these currencies might be patient. Over time, these currencies are expected to recover and this eventual rebound should boost cash flow.

The only exception we would make is the Indian rupee. Although COVID infections are dropping as steeply as they are increasing and mobility improves dramatically, we continue to believe the rupee may weaken from here. The second wave of infections in India is likely to have a bad effect on the economy. We believe that the Reserve Bank of India (RBI) will keep interest rates on hold and keep its asset purchase plan in place longer than initially expected. In addition, we believe that the RBI may seek to intervene in foreign exchange markets and artificially weaken the rupee in an effort to support the economy through more competitive exports. The depreciation of the rupee should be gradual, but nonetheless noticeable, as we are bullish on emerging Asian currencies with the exception of the Indian rupee.