A fear barometer – USD / JPY has been shown to measure covid worries, rising and falling with US worries and yields. Traders will be watching the cloudy Tokyo Olympics, the Federal Reserve’s decision, the first glimpse of US growth in the second quarter – and the Delta variant as well.

Reality check – Global stock markets have taken note of the Delta COVID-19 variant and its rapid spread beyond India. While many developed countries are vaccinated, vaccines do not provide full protection and the highly transmissible strain harms unexposed people around the world.

Concerns about the economic impact sparked a massive sell-off of stocks on Monday and a rush for bonds. USD / JPY responded to fears with a decline, which was also correlated with falling Treasury yields – unlike movements of the dollar against other currencies. The currency pair provided straightforward transactions.

Coronavirus infections are on the rise in the United States – mostly in under-vaccinated areas, but now in all 50 states, dampening prospects for stricter Fed policy. Fears of rising inflation and a consequent decrease in the bank’s bond purchases seemed to be temporarily ruled out.

Cases are increasing slightly in Japan, including Tokyo, where the delayed Olympics began. Reports of athletes and other officials testing positive did not deter organizers. Yet polls show locals fear the Games will bring more variations and turn into a super-broadcast event. The capital remains under a state of emergency.

Stimulation: A bipartisan infrastructure deal in Washington seemed near, but disagreements failed to pass a first procedural vote. The markets ignored the news.

In Japan, the national consumer price index surprised with 0.2% in June, beating expectations of a 0.1% drop. However, the Bank of Japan’s 2% target remains elusive.

US Events: Will the Fed Promise Support?

The Delta variant is expected to continue to spread in America, potentially causing an increase in hospitalizations and deaths. While the safe haven dollar has the opportunity to appreciate against most currencies, it would likely fail to fight against the yen. Falling US yields are strongly correlated to USD / JPY.

In addition to tracking covid stats, there are plenty of scheduled events that could tip the dollar. Durable goods orders for June are expected to show an increase in investment and serve as the input to gross domestic product data released later in the week. Of particular interest is the Nondefense Ex-Air figure.

Will the Federal Reserve react to the increase in coronavirus cases or will it speed up its rhetoric on typing it? This is the main question for the markets around the main event of the week. Fed Chairman Jerome Powell recently said inflation is “uncomfortably high” – which would mean an upcoming cut to the bank’s bond buying program.

However, the world’s most powerful central banker didn’t seem in a rush to print fewer dollars. Two weeks after he testified on Capitol Hill, cases of covid continued to rise and spooked the markets as well. That and disappointing business and consumer surveys could prompt the Fed to postpone any early withdrawal of support.

Investors circled the bank’s Jackson Hole Symposium in late August as an opportunity to signal tougher policy, and they’ll want such a move. The Fed is buying a total of $ 120 billion a month in bonds and has indicated it will hike rates twice in 2023. No new forecasts are expected at this time.

A dovish message would send stocks higher and the dollar lower, while a bullish tone like June could weigh on support for the greenback, albeit at a limited rate against the safe haven yen. Overall, nervous markets imply a lose-lose situation for the USD / JPY.

Markets will have little time to digest the Fed’s decision before the United States releases its first GDP estimate for the second quarter. After growing at a solid 6.4% annualized rate in the first three months of 2021, economists are forecasting an even faster rate of 7.9%.

Finally, the Fed’s favorite inflation indicator – basic personal consumption spending (Core PCE) – is expected to shake the markets on Friday. After peaking at 3.4% year-on-year in May, a further rise is expected.

Here are the main US events coming up this week: 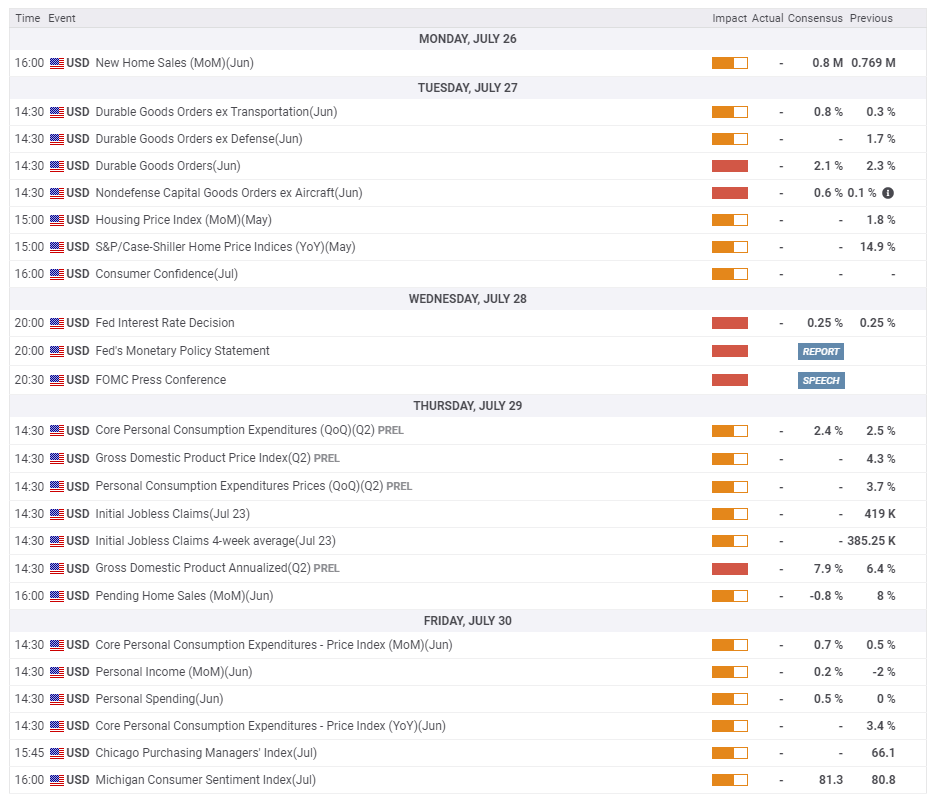 Japanese events: the Olympics in sight (and not for the medals)

The Japanese government continued to postpone the 2020 Olympics despite the increase in cases – but the event remains at risk, especially if additional attendees test positive. Even if there are only limited cancellations and the Games end with a flashy ceremony, the sight of empty stadiums could weigh on feelings.

How will the USD / JPY react? A blow to Japan’s coffers should not hurt the yen but rather strengthen the safe haven currency. If news of infections wears off, the yen could suffer.

The success or failure of the Games also has a political impact, as Prime Minister Yoshihide Suga faces an internal re-election in his LDP party in September. Any fear of political instability could weigh on sentiment.

The economic calendar features a slew of releases over the weekend, including the unemployment rate – an enviable 3% in April – retail sales and industrial production.

It is essential to note that global risk sentiment has a stronger influence on the yen than Japanese indicators.

Here is the list of Japanese events on the FXStreet calendar:

The dollar / yen rebound off the 109 level proved to be technically significant – the currency pair resumed both 50 and 100 day Simple Moving Averages (SMAs). As momentum remains slightly lower and the pair has established lower lows, USD / JPY buyers have an advantage.

The key to the next moves is in the hands of the Fed. Powell may be inclined to focus on the recent disappointing data and the Delta variant at the expense of inflation, which could weigh on the USD / JPY.

the FXStreet Forecast Survey shows experts expect USD / JPY to consolidate around current levels within the week, but then fall below 110 ht over the medium term and extend its decline later. Average targets have been lowered slightly from the previous week.