Stony Brook University President Maurie McInnis took the stage at the Charles B. Wang Center Theater on Wednesday, October 20 and delivered one of the highlights of the inauguration week, her presidential talk on “L ‘shadow of slavery in American public life’.

“Humanists like me have resisted change, but we have the opportunity to engage well beyond the walls of academia at a time when our voices and interventions are needed more than ever,” McInnis said in his remarks. opening. “Looking at my own area of ​​research, many of the topics that make headlines today – sexual violence, racialized police brutality, mass incarceration, racial injustice, political polarization – all have roots deep historical and moving forward, we must tackle both history and its lingering legacies.

McInnis discussed two slavery-related research projects in her lecture and described how, as her research evolved, she found that her work on the past had a deep resonance with the issues of the present. Since then, she has worked with historic sites and museums on projects related to local conversations about racial divide and injustice, memory and civilization, and ultimately to chart the course for a more inclusive future. 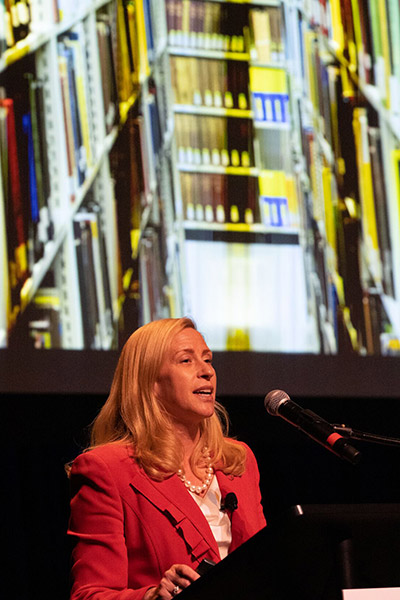 The first research project undertaken by McInnis explored Virginia’s role in the American slave trade. This project began with his book, Slaves Waiting for Sale: Abolitionist Art and the American Slave Trade, which centered on a series of paintings and young British artist, Eyre Crowe, after visiting America in the 1850s.

“The images of his work were all shot in Richmond, Virginia, one of the largest human trafficking centers in the 1850s,” McInnis said. “What is particularly remarkable about these images is that they are among the very few images based on eyewitness testimony from a slave auction.”

Intrigued, she set out to locate the places Crowe had visited and what he had seen in the hopes of using those spaces to help educate Virginians about the horrors that had happened there, and possibly trace some of the lives of the people Crowe represented.

She then partnered with the Library of Virginia and the State Archives for an exhibition that would complement her book, centered on exploring both the material experience of those caught up in commerce and the how the visual has been used to help advance the abolitionist cause. .

“I thought that an exhibition could help the city of Richmond recognize, confront and understand its role in human trafficking in the 19th century,” she said. “The Library of Virginia was willing to take on an exhibit that must have been quite controversial. “

The exhibit itself has been seen by tens of thousands of people, more than ever in an exhibit at the library. A traveling version was then made available to libraries across the state. This version is part of the current installation, To Be Sold: Virginia and the American Slave Trade, currently on display at Wang Center through December 10.

The second research project that McInnis discussed was with the University of Virginia, where she was a faculty member for almost 20 years.

“I taught art history and American studies and over time my scholarship and my teaching merged,” she said. “I had also attended AVU as an undergraduate in the 1980s, and the community was completely unaware of the institution’s history of slavery. It just hasn’t been discussed, not mentioned, not commemorated, not to be seen. “

McInnis said it was the students who pushed her further to tell the important historical story.

“I learned from my students how keenly they felt the weight of this story,” she said. “They found the constant references to Thomas Jefferson oppressive, they did not feel welcome and included in the historic spaces of the university, spaces which had been built and maintained by slave labor and later separated for an additional 150 years. . They felt they were treated like unwanted people. It was clear to me that even though the official public history of the university never mentioned slavery, and even though there was not a single public acknowledgment on the university landscape, the presence of the slavery cast a shadow over the current state of university life. “

After his talk, McInnis answered questions from the audience, including one regarding leadership’s responsibility in facilitating such difficult discussions.

“I once taught the basics of slavery at AVU, and after that it was my students who pushed me,” she said. “They wanted to know more and encouraged my research in that direction. As I learned more, I brought things back to them, my ideas became more specific, and they became part of this process. I see such a link between the research we do and the teaching we do. We need to keep moving these conversations forward and find a way to measure the impact we have on public engagement and public conversation. These are tough, tough questions, and I don’t have an answer. But I want to talk about it.