Intense Cycles has had a new downhill bike in the works for a while now, first spotted under Aaron Gwin in some Vee Tire Co promo photos for their Intense Factory Racing announcement of support. The bikes ridden by Aaron and his Intense Factory Racing teammates at Fort William last weekend are still prototypes, and we’re still unable to confirm if any of the tech you’re about to read will go into production.

Anyway, given that the team is no longer flying the current M29, for all intents and purposes it can be said that Intense has moved away from the VPP bond. It’s replaced by a new high pivot location on a four-bar linkage, with an idler pulley to isolate the majority of drivetrain forces from those of the suspension. The word “i-track suspension” is printed on the drive side of the rear swingarm, next to the i-track logo. We haven’t had a conformation from Intense yet, but it looks like Intense Cycles is using at least some aspects of the i-track suspension design. The whispers on the i-track Facebook page (where they call this bike the M279 HP1) would certainly suggest that this is so.

Unfortunately, Gwin’s weekend was cut short when he failed to qualify for the final. What looked like half the elite men’s field went through the Scottish arch with very little air pressure in the rear tire; Unfortunately, Aaron was one of them. A quiet Sunday morning for Aaron meant that his mechanic, John Hall (of TRP Hall Lock fame), was available to tell us about the new rig. Intense Cycles’ move to a high-pivot suspension linkage really comes as no surprise to anyone. The convincing victories of Gracie Hemstreet aboard the Norco Range, Valentina Höll on the Trek Session, Amaury Pierron, Myriam Nicole and Camille Balanche aboard the Commencal Supreme DH V5, as well as the numerous podiums on which Benoit Coulanges and Thibaut Daprela have climbed, as shown by. trend is more than a fad. When it comes to kinematics, there is a strong case for a linkage that provides majority rear axle trajectory, especially in the downhill discipline. Still, to understand the approach of Jeff Steber and Intense Cycles race engineers, we started our conversation with John Hall by asking why they chose to move away from VPP linkage for this new four-bar design.

“Essentially what they were looking for could be found with kinematic changes, and with the VPP design it was a little harder to find what we were looking for, so we moved forward based on the bikes the guys already had ridden, before experience, what they were looking for, things like that. So we sat down for a long time and talked about everything we had in terms of geometry, kinematics, how riders want the bike to feel in certain situations, and four bars were basically the best option for give the guys what they wanted” – John Hall, Intense Factory race mechanic.

What about the i-track suspension? Well, we haven’t gotten anything out of John on that (yet). Australia-based i-track suspension has been designing high-pivot mountain bikes for many years, as far back as 2013 according to their website. Unique to their suspension platforms is a “floating idler”, seen most recently on the Terra Bikes Aria, but also on Neko Mulally’s Frameworks bike of his own design. i-track basically refers to a suspension design where the position of the idler pulley moves relative to the front triangle, so the position of the upper chainline that passes between the chainring and cassette moves as the bike is pushed through its rear wheel travel. This appears to be what we see here on the Intense bike’s four-bar linkage.

In this setup, as the bike is pushed on its rear wheel travel, the position of the idler wheel changes relative to the front triangle, following an arc that moves up and back. This should have a marked effect on the bike’s anti-squat numbers, with chain forces interacting with suspension forces to varying degrees depending on what part of the rear wheel travel the bike is operating in. Although we don’t have any confirmation yet, it looks like Intense has struck a deal with i-track to use their patented “crazy floating” suspension platform. John couldn’t share specifics about it, but he said the team experimented with different idle positions.

Here on Aaron’s bike, the tensioner can be seen mounted in the middle position out of three possible. Everyone else on the Intense Factory Racing team also used the idler wheel in that middle position. In addition to the idle position, riders may also experiment with different tooth counts, which will again influence the interaction of drivetrain forces with those of the suspension, i.e. pedal kickback. John says that while they can’t quite achieve zero pedal bounce on this frame, they strive to keep it to an absolute minimum.

He tells us that by changing the position of the idler wheel and/or the number of teeth, they can adapt the bike to be more efficient on the pedals, or more active in difficult conditions, depending on the type of track. on which they run. John explained that the bike you see in front of you is what the team calls version 1.2. It’s missing some geometry tweaks seen on previous prototypes, the use of which is more relevant as the team seems to have landed on a geometry they like, at least for now.

The bike’s head tube gets recessed upper and lower headset cups, so the team can play around with reach and head angle adjustment. Teamwork worked closely with the guys at Works Components to do this, and John tells us that this headset setup and head tube size will likely stay with the production bike to give customers the same freedom to experiment with these two geometry numbers. In Fort William, the team was trying a linear link for the first time; Aaron paired his with an air shock, as did Seth Sherlock, while Joe Breedon and Dakotah Norton opted for coil shocks. John says the team wanted to avoid developing the new bike specifically around a coil or air shock, instead choosing more versatile kinematics to suit the wide range of World Cup DH tracks to run and the range of runners who would run. them. The decision between coil and air springs can be very personal, so Intense wanted to make sure their riders had a bike that would perform well on either one. 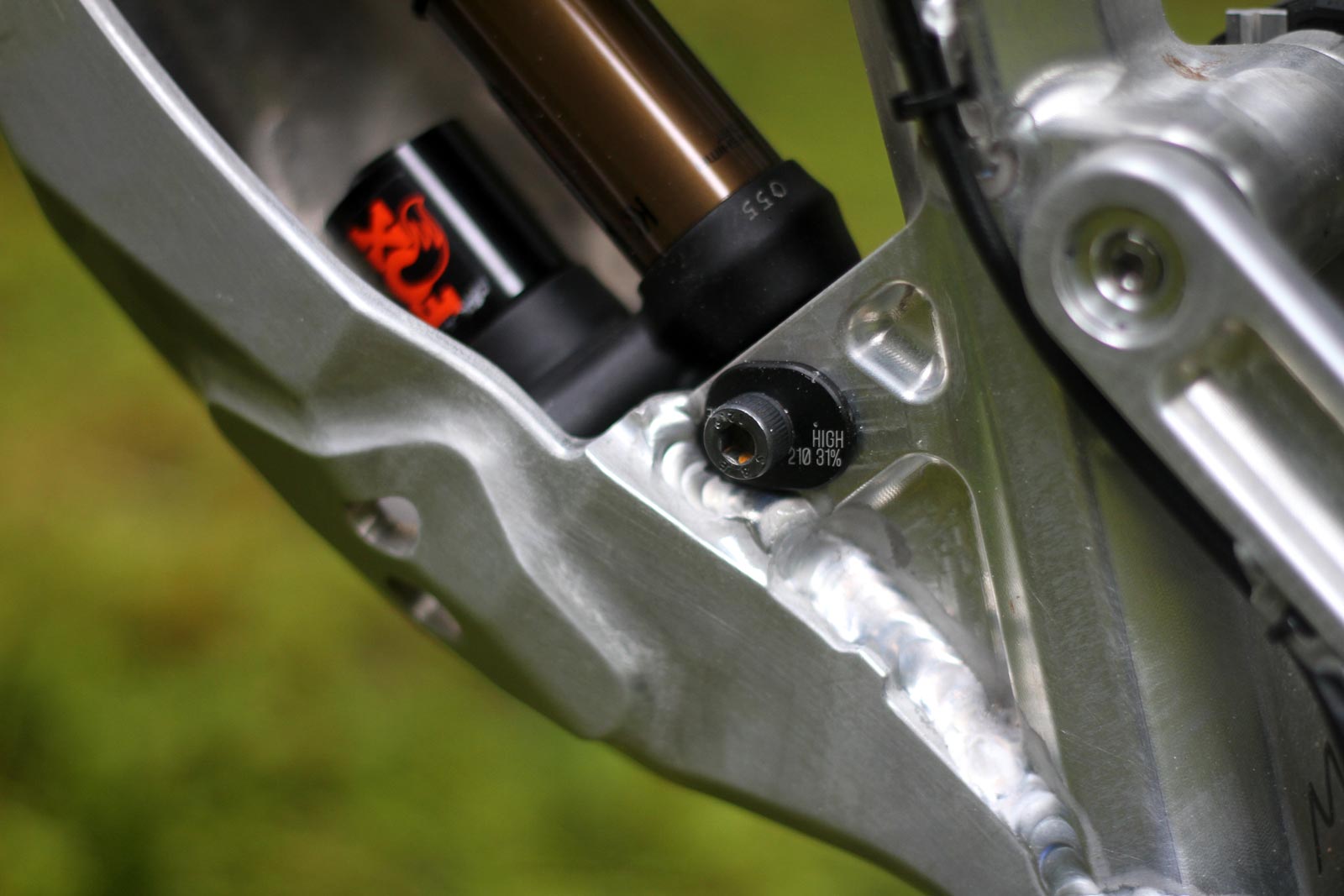 The new Intense DH bike uses a 203mm fork, but John was unable to divulge rear wheel travel numbers. Aaron (and Dakotah) don’t have standard shocks inside their fork or shock.

A flip-chip at the lower shock mount allows for four possible mounting positions, differing in both fore-aft and vertical position, affecting linkage progression and bottom bracket height. The flip-chip on Gwin’s bike has “HIGH 210 31%” printed on it, but John was keen to point out that since linkage design has evolved recently, those numbers don’t really mean anything anymore. The final location where adjustments can be made are of course the dropouts, where a flip-chip can change the length of the rear center of the bike. There are three possible positions; Aaron opted for the short basic position. The rear brake can be mounted in three possible positions, in accordance with the three basic potions, in order to correct any changes in the rear-center length.