“If you want to have a dog, you have to have a German Shepherd. They are beautifully bred to be professional in any task, ”said Yasser Al-Maghrabi, vice president of the German Shepherd Dog Club of Egypt (GSDCE).

Known for their strong, noble bearing and as one of the oldest dog breeds, German Shepherd Dogs (GSD) rank in the top ten in the world in terms of popularity. Not only are GSDs popular for their scenting ability, which equips them for scouting jobs, but they also have the flexibility to perform any task assigned to them.

For example, one of their character traits is that of a good companion for people who need someone by their side for whatever reason.

“My GSD makes me happy when he welcomes me home after a long day at work. It comforts me even more than my children, ”said Khaled Al-Ghamry, 48, a dog owner from Cairo.

Al-Ghamry has been raising dogs for 18 years. During these years he was the owner of four types of dogs, including German Shepherds. His love for them made it difficult to part with them, because for him dogs are like humans. They have their own characters and personalities regardless of their race. They need care, love and enormous responsibility from their owners.

Dog food is a serious problem because human food can be toxic to dogs. Al-Ghamry prepares special food for his dogs to make sure they eat what’s best for them.

“It is a crime to leave a dog on the street,” Al-Ghamry said. “They will wonder what they did to their owners to get them to throw away like this. They may even die of depression and the agony of abandonment. 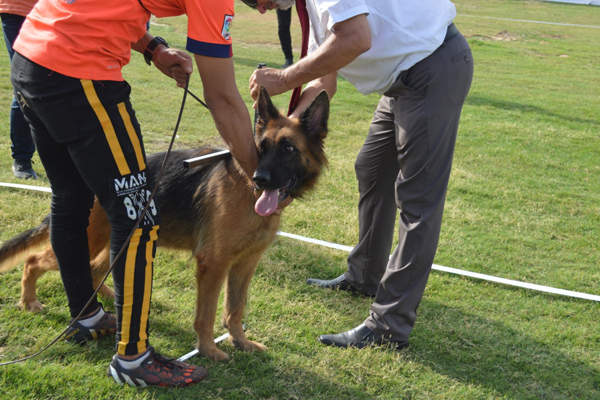 Due to their character traits, GSDs are very popular in Egypt. The GSDCE has organized events specifically for GSD twice a year since 2015, including international events. Although the club was established in 2007, the competitions did not begin to take place until eight years later.

“It took a long time to publicize the club, which was created specifically for GSD enthusiasts,” said Ashraf Selim, general secretary of GSDCE.

A national competition was held in October, and an international called Sieger will be held in March 2022 in Egypt with international participants. The date of the competitions is decided by the Association of German Shepherds in Germany.

“To participate in the competition, a dog must have special characteristics that enable it to meet various challenges,” Al-Maghrabi said. The dog must be fit and active to participate in competitions. He must breathe well and have completed obedience training. 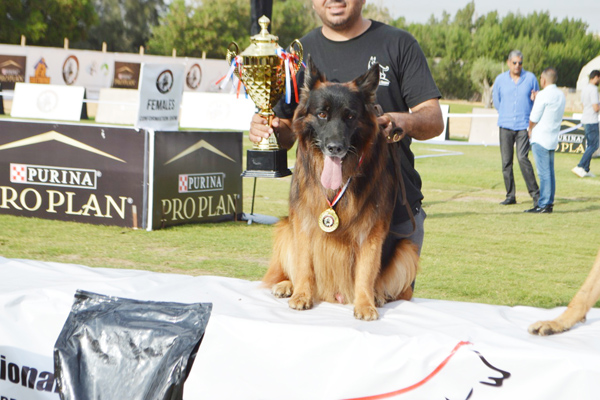 GSD owners are classified into two types: owners who buy them and breeders who produce them. Most of the contestants this year are breeders and almost half of the dogs were bred locally.

For dog lovers, it is important that there are dog shows and competitions, as they help preserve the lineages of certain types of dogs. The judges assess the bloodlines of the dogs as well as their character traits.

“For children with autism, certain GSDs with specific character traits are chosen for special training to accompany them,” said Hussein Al-Amin, head of training at GSDCE.

He explained that dogs are trained to act calmly and not aggressively if a child with autism is acting unpredictably. For people who suffer from trauma, dogs with emotional traits can make excellent pets. For the elderly who need companions, there are also dogs that can support and entertain them.

When it comes to obedience training, dogs are trained before competition to understand all the demands placed on them. The principle of obedience training is that a dog should act in a friendly manner if instructed by its owner. “Dogs can be a burden on their owners if they haven’t received the proper training,” Al-Amin said.

Prior to competition, dogs must undergo training qualifying them to participate. They are assessed to decide if they are eligible to enter, and if the answer is yes, they are trained for an entire month by a trainer. The evaluation criteria used by judges include follow-up, obedience and protection.

“Through competition controls, a dog’s behavior and character is inspected to make sure he understands his owner’s lifestyle,” Al-Amin said. He added that a dog’s participation can also allow it to breed, as the competition is supervised from Germany.

The competitions do not have financial prizes, and the winning dogs receive medals according to the levels won. “The real benefit we get from our participation is more moral than financial,” said Galal Tolba, a breeder. “It’s a hobby that we love to participate in. ”

One of Tolba’s dogs has won the first level three times and the second level once in competition. He trains his dogs for months to compete, even though it can cost him dearly.

Al-Maghrabi said that a dog’s participation can increase its value among breeders, also increasing the value of its offspring.

Compared to competitions abroad, the only difference is the location because everything is organized under the aegis of the German Association in Germany. Having a GSD as a pet is growing in popularity around the world and more and more dogs are participating in competitions.

* A print version of this article appears in the December 16, 2021 edition of Al-Ahram Weekly.